How to Tackle the Wicked Problem of Information Disorder 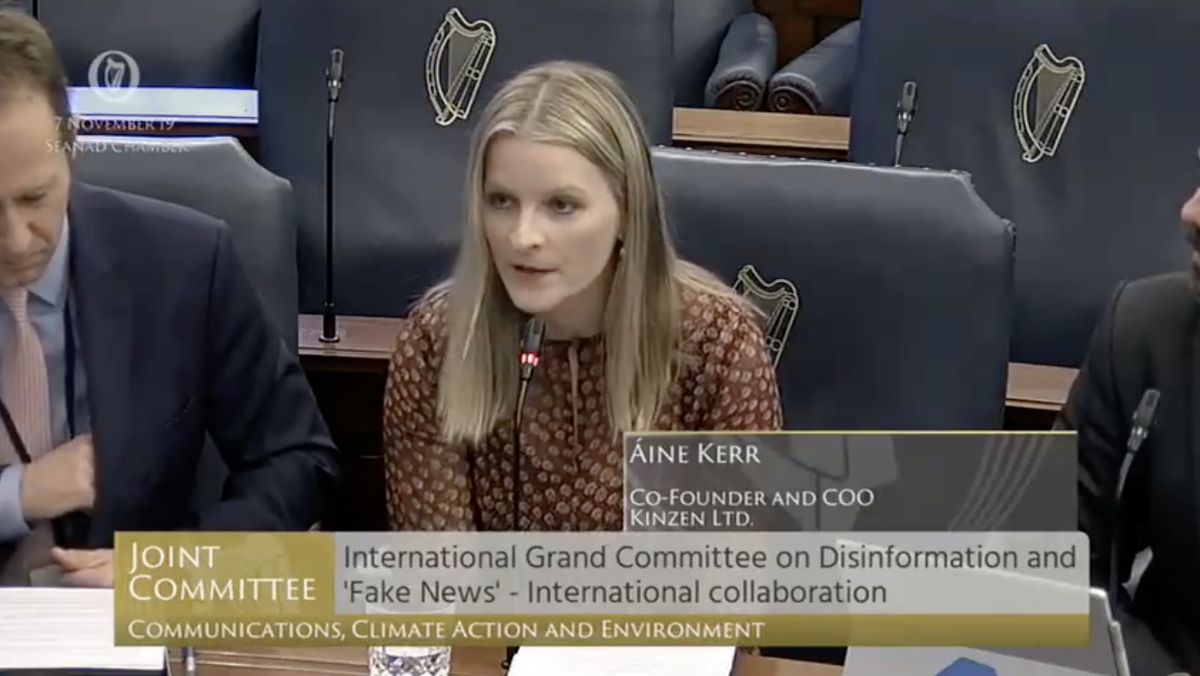 On Thursday, November 8, Kinzen co-founder and COO Áine Kerr spoke in the Irish parliament at the International Grand Committee on Disinformation and ‘Fake News’.

Read her remarks below, or watch the video:

— Houses of the Oireachtas (@OireachtasNews) November 7, 2019

Thank you Mr Chairman, members of the committee, parliamentarians, and assembled guests for the opportunity to contribute to the International Grand Committee hearing today.

We are in the midst of a Wicked Problem and running out of time.

A wicked problem, by its very definition, is something that’s difficult or almost impossible to solve because of incomplete, contradictory, and changing requirements. It cannot be solved through one course of action.

Our Wicked Problem today is an Information Disorder.

And that disorder is a symptom of a much wider societal problem: a collapse of trust in institutions, including media.

I’ve worked as a traditional journalist with Ireland’s main newspapers, with Storyful; the world’s first social media news agency, with Facebook; the world’s largest platform, and co-founded a new start-up called Kinzen which is working to connect people with quality news and information.

Throughout some 16 years in the media industry, I’ve remained ever resolute about the importance of quality journalism to help people better understand the world around them but ever concerned about the impact of more, faster content, everywhere.

I’ve seen a new information ecosystem emerge in which everyone became a publisher, the means of consumption changed, and the modes of distributing news became fragmented.

There were positives — we’ve largely become more connected, educated and engaged. But amid that period of massive disruption and digital transformation wherein online experiences were built for speed, clicks and scale, the connection between people and journalism was lost.

We’re at another crossroads now. There is an opportunity for correction. The task list is long and complicated. But for me, there are three core calls to action:

1. To ensure that we connect people with quality news and information

2. To build cross-collaborative projects across multiple sectors so there are shared learnings

So what does that mean in reality?

Firstly, I believe that today’s recommendation systems are a root cause of information disorder. We need radical transparency around the programming of algorithms.

A new generation is seeking alternatives to the toxic noise, hidden surveillance and endless distraction of their social feeds. They demand an experience of information that rewards their best intentions, fits their daily routine and protects their privacy.

That means, we as an industry, need to build radically different news experiences if we are to reconnect people with quality news and information.

In Kinzen, for example, we’re building a Citizen Algorithm, in which data science and machine learning is guided by human curation and explicit user feedback.

We also require collaboration at an unprecedented scale across multiple industries such as Journalism, Media and Information Literacy (MIL) and Research.

To be truly collaborative, we need to bring together civil society, technology companies, academics and governments so we can truly answer the question: what can we do together to tackle this Wicked Problem, while protecting Freedom of Speech?

Regulating the internet is complex. The risks are immense. And committees such as this one must ensure there is careful deliberation of well-researched evidence so that practical enforceable standards and laws can emerge.

New reports, like that emanating from France, which outlines a detailed strategy for increasing oversight over social platforms while allowing an independent regulator to ensure compliance with standards, deserve consideration. Or the ideas emerging from the Transatlantic High-Level Working Group on Content Moderation and Freedom of Expression in which they’ve discussed enabling platforms to set standards, but enabling governments to hold platforms accountable to those standards via Internet Courts.

Wicked Problems are difficult but not impossible to diminish. It will now take collaboration, transparency and innovation on an unprecedented global scale for us to realise if the moment for correction is upon us.

Get our digest delivered straight to your inbox.

Great! You're successfully signed up.
Something went wrong while submitting the form. Try again or contact support@kinzen.com.