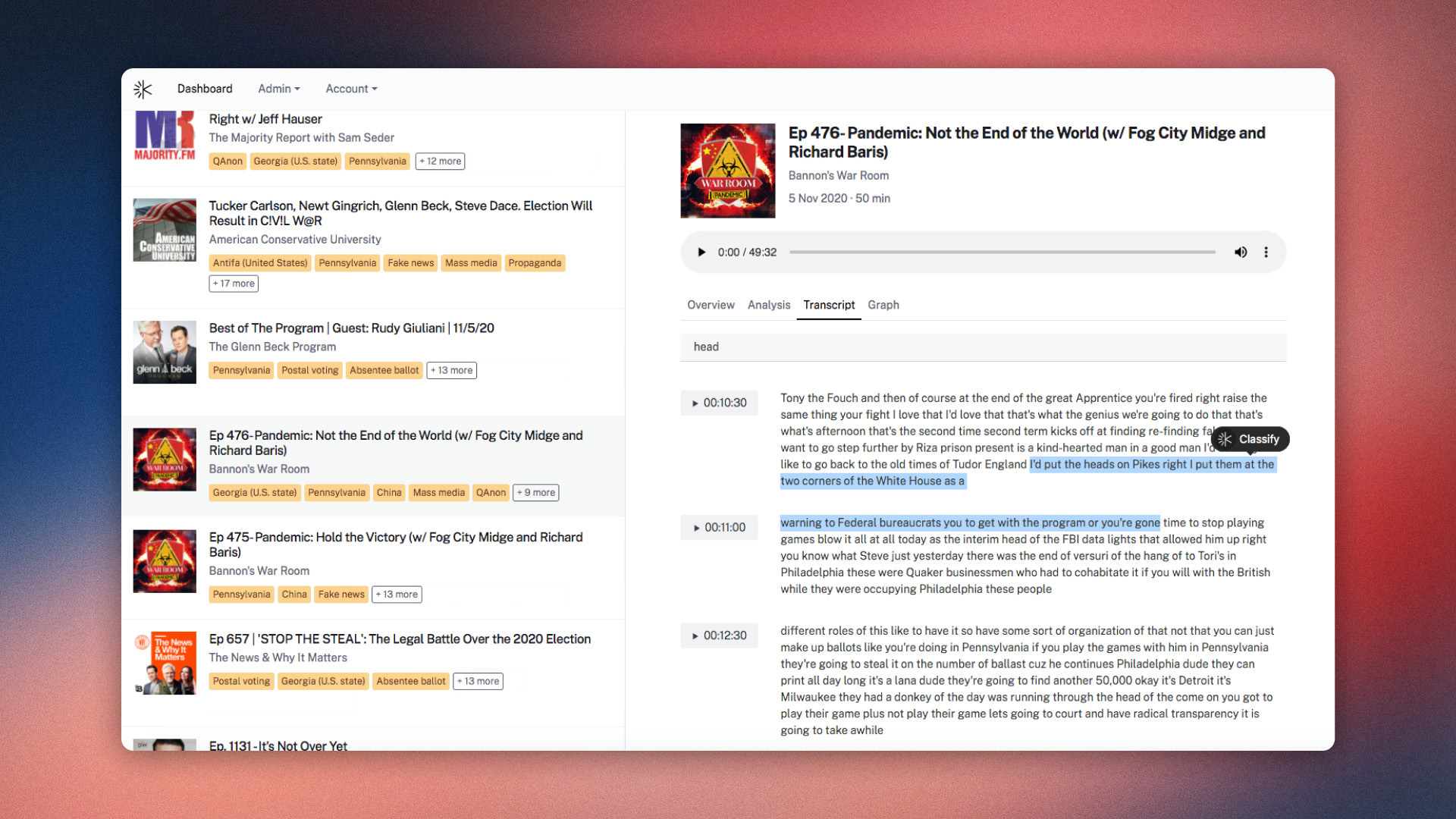 The last few days have taught us much about the evolution of disinformation as a threat from within a democracy, rather than an external attack.

Dangerous lies spread from the top, with Donald Trump acting as disinformer-in-chief. But they rise organically from communities, with disinformation crafted to suit local nuances in counties critical to the outcome of the election.

And in the past few days we’ve watched a new leadership model emerge within organised campaigns of deception - what we might call the Disinformation War Room.

The traditional notion of the war room is of charismatic political operatives in the pressure cooker of campaign HQ trialling and shaping narratives that will organically take hold on the campaign trail.

During recent years, we’ve seen a new War Room emerge within an affiliate network of podcasters and YouTube channels. The MAGA Nation War Room is composed of former Trump advisers like Steve Bannon and Sebastian Gorka, and influencers of Trump’s insurgent army, like Dan Bongino or Steven Crowder.

The MAGA War Room is the hive mind that processes the ‘dog whistles’ that emerge on 4chan and Twitter hashtags, distills talking points on Fox News, or informs stream-of-consciousness diatribes from Trump and his sons. The primary distribution network for this war room appears to be Facebook pages, where Trump-supporting influencers dominate the list of the most engaged FB pages week after week.

But their thinking evolves in greater detail within the long, collaborative conversations that feel remarkably intimate. Sound and vision seems to amplify the emotional impact of their ideas. This is disinformation tailored for the most powerful of our senses, delivered through the most intimate of mediums.

The critical limitation of our understanding of the Disinformation War Room is that it’s much harder for researchers and reporters to analyse the content formats in which the thought leaders shape their narratives. Video and audio is much harder to track, transcribe and analyse at scale than text.

At Kinzen, we’ve developed a tool to evaluate disinformation in audio and video formats, and this week it’s given us a vivid insight into the rapid iteration of disinformation narratives that undermine the election outcome.

Just as interesting, and potentially more important, are the feedback loops that emerge from the transcript of this broadcast, and other similar podcasts and YouTube content we have analysed.

Our approach is a combination of editor and machine. Our editors manage an evolving database tracking the affiliate network of MAGA influencers, and language being used to undermine the election process. Using the power of natural language processing, we can see the key topics, locations, phrases and targets being distilled and distributed within this modern War Room.

In recent days the various allegations of electoral fraud have been numerous. They haven’t been reported on much within the podcasting or video space, but they’re there, and they’re just as dangerous:

Just as we see the hashtag #electionfraud spread on social networks, we see the same narrative emerging in podcasting through our tool:

Just as we see #sharpiegate start to trend - a misinformation narrative with no truth to it whatsoever - we see podcasts popping up with the same or similar phrases:

Just as we see #BidenCrimeFamily spread on various networks, it regurgitates and is further promoted through familiar names and faces on podcasts and videos:

The tool analyses videos too. We’ve seen the same patterns of narrative shaping moving across to YouTube videos:

It’s clear that “information warfare” is how many of the people within the collective MAGA hive mind see the current infrastructure of media and communications. Just within the last few days we see the phrase “infowar” return various video results within the tool:

In the past 48 hours, we’ve had a remarkable deep dive into the articulate, strategic and sometimes tactical stream of consciousness that shapes the hive mind of disinformation networks.

We see evidence, in this limited experiment, of an opportunity to create an early warning system for talking points that will galvanise widespread adoption and real world action.

Our work is experimental. But this momentous election proves this work is critical. We need to invest heavily in infrastructure which scales the moderation of video and audio content. And we need a better measure of the exponential power of disinformation when it is experienced through sound and vision.

You can sign up for our weekly newsletter at https://kinzen.com/. If some of our work could be helpful to you, reach out to lucy@kinzen.com